The Dredge – a floating monster
Although the town’s main gold extraction was through open-cut methods, the gold discovered in the river flats wasn’t as easily accessible as gold found further up Reedy Creek.

In 1936 production of Cock’s large bucket dredge began, mining alluvial gold and tin until 1954.  It was one of the largest dredges in the Southern Hemisphere – a floating monster weighing 2,142 tons and pulling the third most power from the State Electricity Grid after Melbourne and Geelong. In its 18 years of operation the dredge produced 70,664 ounces of gold and 1,383 tons of tin concentrate.

By the time the dredge was decommissioned it had dredged 30,000,000 cubic metres from the river flats of El Dorado Plain.  It remains a formidable sight and graphically illustrates the extent of the mining operation in and around the town.

You can visit the dredge in its final resting place, located on the outskirts of the town on the El Dorado-Byawatha Road. 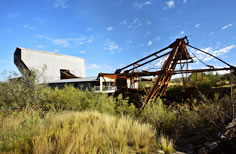